The Frutorious ‘Off-World’ update is out!

We’re all really excited about releasing this because we’ve added a whole load of content, put in lots of feedback we’ve had from our lovely players, added social features and fixed a few little bugs here and there.

One evening Mr Fruts was out looking for mushrooms with his best friend Frutorious F.I.G.  Suddenly, an ALIEN SPACE SHIP appeared and Mr Fruts was sucked aboard.  Those ghastly Aliens had come all the way from our game ‘Shepherd: Mars Needs Sheep!’ to steal all the fruits in Frutland!

Mr Fruts and everyone from Frutland were transported through space and time and across infinite dimensions ending up an awfully long way from home.

There’s a brand new 36 ‘Off-World’ levels for you to play in the update.  They are set over four different dimensions that the Aliens have transported you to.  Some are very weird, some are very strange but they’re all very FRUITY!

You’ll also encounter a new gameplay feature – the WORM HOLE! This circular tunnel in space-time will suck you in and then spit you out somewhere else in the level and leads to some very funky puzzles to solve.

A warm, dank and dark dimension filled with enormous mushrooms and giant wooden statues. Things here are quite easy and fun, and help you to start to get your head around the wormholes 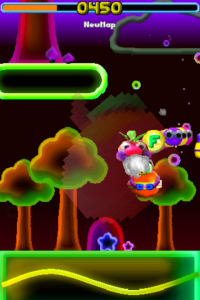 When Mr Fruts was dropped into this telepathic dimension, it used his emotional energies to fashion plasma into the form of a place where Mr Fruts feels most happy: Frutland. 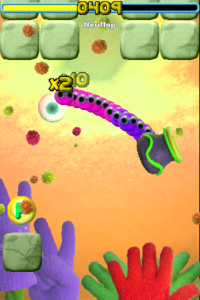 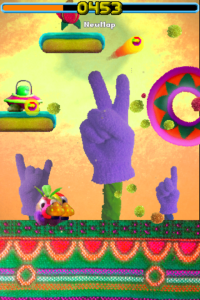 Next, F.I.G drops Mr Fruts off  somewhere very hot and very confusing: a dimension where wool watches you; Peyote Dimension.  Things are really starting to get tricky now with cunning levels in distinctly trippy surroundings 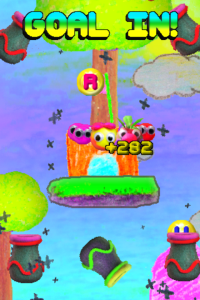 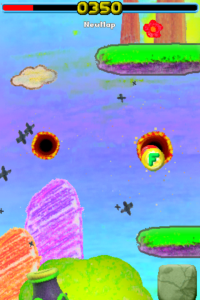 This is a childish sketchy world full of streaks of colour and wormholes… along with the trickiest, most mind-bending Frutorious puzzles ever conceived!

As well as 36 brand new levels, the worm holes and the Aliens from Shepherd: Mars Needs Sheep, there’s some brand new social features!

You can now brag to your friends on Twitter or Facebook when you get a new Hi-Score on Frutorious Pro, and you can publish your progress in the main game on your favourite social media timeline too.  What’s more, every time you make a tweet or a post, Frutorious F.I.G. will give you some play-coins which you can spend on power-ups in the game!

Everyone asked for it… so we made it happen! You can now play Frutorious Pro using either the retro art or the hand-made art.

We’ve also added an extra 5 seconds to the clock to give beginners more of a chance to get into the awesomeness that is Frutorious Pro.  It still provides the same challenge to the battle hardened Frutorious Pro players but we hope this will open up the score boards to some new contenders too.

We’ve also written a new tune for Frutorious Pro which we think suits the vibe better.

We’ve made lots of tweaks to make the game more accessible, stable and fun.