We wrote an article for GameDevTutsPlus.  It’s all about what we learned making Avoid Droid.

Please give it a read!

It’s been a great week for Avoid Droid press!

The majestic and proud PocketGamer leading the trend as always with an awesome announcement of our iOS intentions, followed up with echoes around the globe by some excellent international sites.  We’re over the moon to get this sort of coverage!  Here’s a round-up of it all…

Huge thanks to all the websites who’ve given us coverage so far.  We’re very grateful and humbled.  Now, we’ve got two weeks left before we submit the PSVita version so we better get on with that.  We’ll give you more news on that and the iOS version very soon.  In the mean time, keep on truckin’!

PocketGamer came round to the Infinite State Games design laboratories the other day to hang out and play some Avoid Droid!

Here’s what they thought:

The game is a throwback to that simpler and brighter era, but to call it “old school” would do it a disservice – this is a thoroughly modern creation, albeit one with a streak of retro rebellion coursing through its fruity veins.

They also asked us some questions about how we go about making games in our own home-grown way here on PocketGamer.biz

The audio is in! Yep, that was our final bit of the iOS conversion. We’re now on putting in little smidgey thingies like the shop and the leaderboards and the menus. In other words, we’re now on the final hurdle!

But no feature can be signed off as finished at ISG without rigorous testing. So here’s Jacob just making sure that a) the audio is working and b) you can still die

So, a month or so in from switching development from iOS to VIta!  Time for a progress report isn’t it.

Well, we’re doing GREAT!  We’ve got the game running, we’ve got all three controls schemes in (touch, tilt and control pads) and we’re just putting in the audio.

Assets-wise, we’re 90% there.  We have all the art finished, all the cameos agreed and drawn (including one particularly stunningly awesome coup that we’ll be announcing soon… you’ll be very surprised indeed to find out what legends of the music industry we’ve got to appear as a cameo!)

We’ve also been recording some voice over with a very talented lady called Philippa.  Her voice has added a touch of smooth class to the proceedings and we’re very happy with the result.  She’s the VO star of quite a few upcoming games this year so we’re super lucky to have her on board.  Here’s a sneak preview of her outrageous swank-du-posh talents…

So next up is the VITA IMPROVEMENTS!  That’ll be some fancy shader work, some particle abuse and some glorious gameplay and game mode improvements.

More news soon!  In the mean time, don’t forget you can ‘like’ AvoidDroid on Facebook and get involved in the development discussion any time you like… https://www.facebook.com/AvoidDroid

The wonderful chaps and ladies at Sony asked us if we’d like to do a guest post on the PlayStation blog to announce Avoid Droid for Vita!  So we did…

In Avoid Droid, fruit appears in sync with a drum beat of ever-increasing tempo. Your Droid loves fruit! But when he tries to eat them, they explode. It’s not all bad though, because those explosions destroy the endless horde of robotic machines trying to squish, zap, stomp and bite you. (It’s their fruit, you see. Don’t ask.)

And got a mention on one of our fave webmags, Polygon

Hooray!  This announcement is the biggest moment for our teeny company yet so it’s feeling pretty massive right now.

We owe a massive massive thanks to Shahid, Lorenzo, Fred and the rest of the guys at Sony who’ve not only found us hiding away but played our game and saw something exciting in it – allowing us to get this far.  Sony have been so helpful and understanding of our situation (they didn’t bat an eyelid at sending the devkits to where we work in our day jobs!).  Making Avoid Droid a completely awesome arcade game for the ages is our ultimate goal, and we know we’re going to make something that’ll honour the guys at Sony, the gamers who are down with this sort of portable arcadey fun, and our own integrity as developers.

There’s generally a positive and encouraging reception to the announcement which has made us very happy!  It’s been a frantic couple of months putting this together and it’s still got a long way to go but we already know this is going to be something utterly kick ass and amazing.  A true gamer’s game.

We’ve taken on board comments expressing a desire for improved visual quality.  Don’t worry guys, we’re still in early development and have a long way to go still 🙂  There’ll be a lot more graphical flair put in later.  We’re still getting to grips with what the Vita can do (lots and lots!) and there’s a lot more we will be doing to polish the game visually when the time comes.  At this stage of development, it’s more important for us to concentrate on the quality of the gameplay.

Thanks, Sony, for having us as a guest blogger – but more importantly for giving us our big break!

Dare was good!  We spent the first day exhibiting, the second day mostly milling around the excellent show, looking at everyone else’s games.  It was impossible not to!

It was fantastic to watch people play both our games.  We must have had over 100 people play our games over the course of the weekend so as you can imagine we’ve learned lots. That’s about the best quality assurance you can get really, watching complete strangers play your game.

We got there early and set up, a few quick tests and we were ready to rock (also, ready to turn the music up really loudly!) 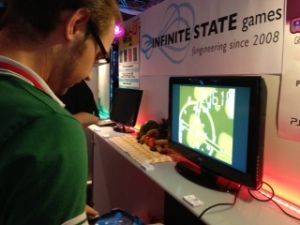 Open for BUSINESS! Here’s our stand.  We were given lots of compliments about our display of fruits.  That was nice.  Everyone likes fruits!

People liked the posters we had made, too.  Our logo looked great too, so big shout out to the Weston-super-Mare Staples crew.  NIce work!

As a crowds started to form, our secret weapon ‘Ritchie’ made an excellent ring master.  Every company needs a Ritchie.  He’s our man who gets stuff done at ISG, be it PR, QA, security or general hook ups.  If we need something sorted, we go to Ritchie.

Roll up roll up!  Our ‘get a high score and get in the game’ competition caused a lot of interest too.  We made a ropey high score table with bits of card.  People loved it and had great fun trying to beat each other’s scores.  For a moment it was like being back on the pier at Weston super Mare in 1989 🙂

We also found that Avoid Droid is a great game to watch.  People really crowded round the big scree watching the game in progress.  Lots of ‘Oooh!’ and ‘OOooof!’ when people pulled off some dicey dodging.  This bodes very well for the YouTube replay sharing facility we’re planning on implementing! 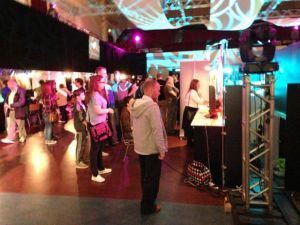 People were really fond of Avoid Droid.  We found the ladies were generally playing the game very differently from the blokes; much steadier hand and much more graceful movements.  It was fascinating to see the scope of different ways people automatically play the game, and this has given us lots of ideas for enhancing the unexpected ‘waltzy’ feel of some areas.

We found that people literally can’t just have one game of Avoid Droid and put it down.  They NEED that second play.  Then the third to better their second.  This is exactly the sort of gameplay experience we’ve been trying to achieve, and it looks like we’re pretty close to nailing it (it looks like we could ease players into the action a teensy bit more slowly)

The surprise of the event was how much everyone ADORED Chill Out Mode!

And here we are in the programme for the event!  A good time had by all.  Thanks Dare, and thanks Dundee.

Here’s a quick video of the weekend.  Sorry about the low-def quality, but you’ll get a feel of what it was like to be there.

As for the other games there, we’re not just saying this but we thought every single one was amazing in it’s own way.

Particular shout outs to Firebrand Games’s ‘Solar Flux HD’ which we thought looked really cool and had amazing audio, and also one of the student Protoplay games where there were three agents escaping a bad guy’s lair – with a fourth player setting off traps using a tablet computer linked to the game.

That agents escaping game was fantastic, totally inventive and our pick of the best game there (apart from ours, of course).  If only we could remember the name of that game!  If someone knows, please drop us a line!  Fingers crossed for a release one day for Wii-U for that.