So, we had a great time at the TIGA 2012 awards. We didn’t win anything, but then we only entered two categories. It was absolutely hilarious seeing our game on the big screen along side all those other whopping titles, a memory which we’ll never forget.

It was a fantastic evening and we met loads of awesome, awesome people. The Stick Sports Ltd. team were ace, we got to chat to Gary Penn from Denki about TV detectives, and nice man from Edge magazine said he’d heard of our game! Hooray!

We know what you’re all wanting to know though… what was the food like?

Starter was celeriac with a pear and bits of blue cheese. It was quite nice.
Main was chicken with some potato. Lovely chicken, nice gravy. Charlie was particularly happy with the gravy.
Pudding was a really nice apple pie with a bit of ice cream, which is just what Barry fancied so he was happy too.

So even though we didn’t win, it was fun. We managed to flood the twitter feed at one point by orchestrating all our friends to simultaneously tweet about Frutorious. We also liberally scattered some fliers about encouraging game journos to support our tiny team and silly game. A few of them found their way onto the front of Future publishing but we have only the wine to blame for that. 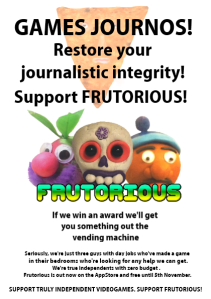 Here’s a video of our evening’s highlights…

Other highlights included getting Bad Hotel’s nomination video soundtrack stuck in our heads (it was a spoof of M.E.T.H.O.D. Maaaaaaan but with B.A.D. H.O.T… Elllll.)
Also chatting to a lovely guy called George who made the lovely, zoney Cubes for iOS who offered to help us get our heads around Unity 🙂

Next stop – losing the BAFTAS!